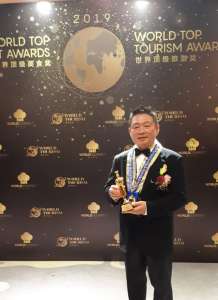 On 16 October 2019 participants from the World Top Gourmet Award 2019 gather at Berjaya Time Square Hotel Kuala Lumpur – Malaysia. The nominees gathered that night with joy for their success in the culinary field from Asia countries, ready to receive awards in accordance with their achievements in the field of food and beverage.

The World Top Gourmet Awards started in 2017, platform is being introduced to recognized the diversity of the hospitality and food and beverages (F&B) industries that in appreciation to those who have made significant efforts and contributions to provide quality service, quality food and beverages and dine experience to bring the F & B and hospitality industry to greater heights in the region.

One of the nominees present that night at the 2019 World Top Gourmet Award was Chef Stefu Santoso who was the only participant from Indonesia, who is also the Executive Chef of APREZ Catering part of AMUZ Group.

That night Chef Stefu Santoso won as World Top Outstanding Master Chef Award 2019, which is a pride for Indonesia and APREZ Catering in particular has a executive chef who is outstanding in the culinary field until he is recognized by the world with received this award.

Grew up in Jakarta, and graduated from Pusat Pengembangan Pariwisata Atma Jaya, Jakarta. Stefu began his culinary career in 1998, working in 4 & 5 stars International Hotel. He was promoted to become Executive Chef on 33 years old at The Parklane Hotel Jakarta (5-Star Hotel, now known as Wyndham Hotel). With that position, He managed Banqueting, Coffee Shop, Steakhouse and also Catering Business Stefu gained immediate popularity from his involvement in Association of Culinary Professionals (ACP), Indonesia, and elected become President Association of Culinary Professionals Indonesia since 2014 until now.

STEFU SANTOSO is a purely Indonesian Chef and Television personality, born on October 26th, 1976 in Jakarta. He is now the Executive Chef of APREZ Catering, Amuz Group, and is considered one of the best chefs in Indonesia.

Aprez Catering learn from and respect the cultures in which we work. We value and demonstrate respect for the uniqueness of individuals and the varied perspectives and talents they provide. Aprez Catering have an inclusive work environment and actively embrace a diversity of people, ideas, talents and experiences.

Our culinary experts will also assist you in choosing the menu and the presentation to meet customer needs at a competitive price.